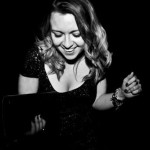 This award is in memory of Veronica Pellitteri (LaGuardia 2009, vocal music).

Veronica was born in Boston to a musical family and grew up in NYC. She was a student of the Special Music School where she studied piano and graduated from LaGuardia in 2009 as a vocalist. Her mom worked as a classical and jazz singer. Her dad is a drummer who has worked with many jazz legends and pop artists. He is currently a professor at Berklee College of Music in Boston teaching drums, ensembles and performance ear training.

After graduating from LaGuardia, Veronica attended Berklee College of Music for two years before moving to Italy where she was in her second year of medical studies at Sapienza University in Rome.

Veronica always loved music from an early age and she was also interested in science. She loved traveling and she spoke three languages: English, Italian and Spanish. She loved animals and cared for abandoned dogs and cats. She passed away in a car accident in Milano Italy in October 2014. A section of the Shelter for Abandoned Dogs of Palermo Italy was named after her in 2015.

For a dedicated and outstanding vocal or instrumental music student to further his or her musical development through private lessons, classes or summer study.

Help support our school and its gifted students